All books are for everyone

Have you ever heard kids (and even grownups!) denigrate other people’s book choices? “This book is for babies!”, “This book is for girls!” or “You should be reading real books by now!” Here’s a poster I made to show kids that they can read whatever they like; reading choices are personal and shouldn’t be judged. 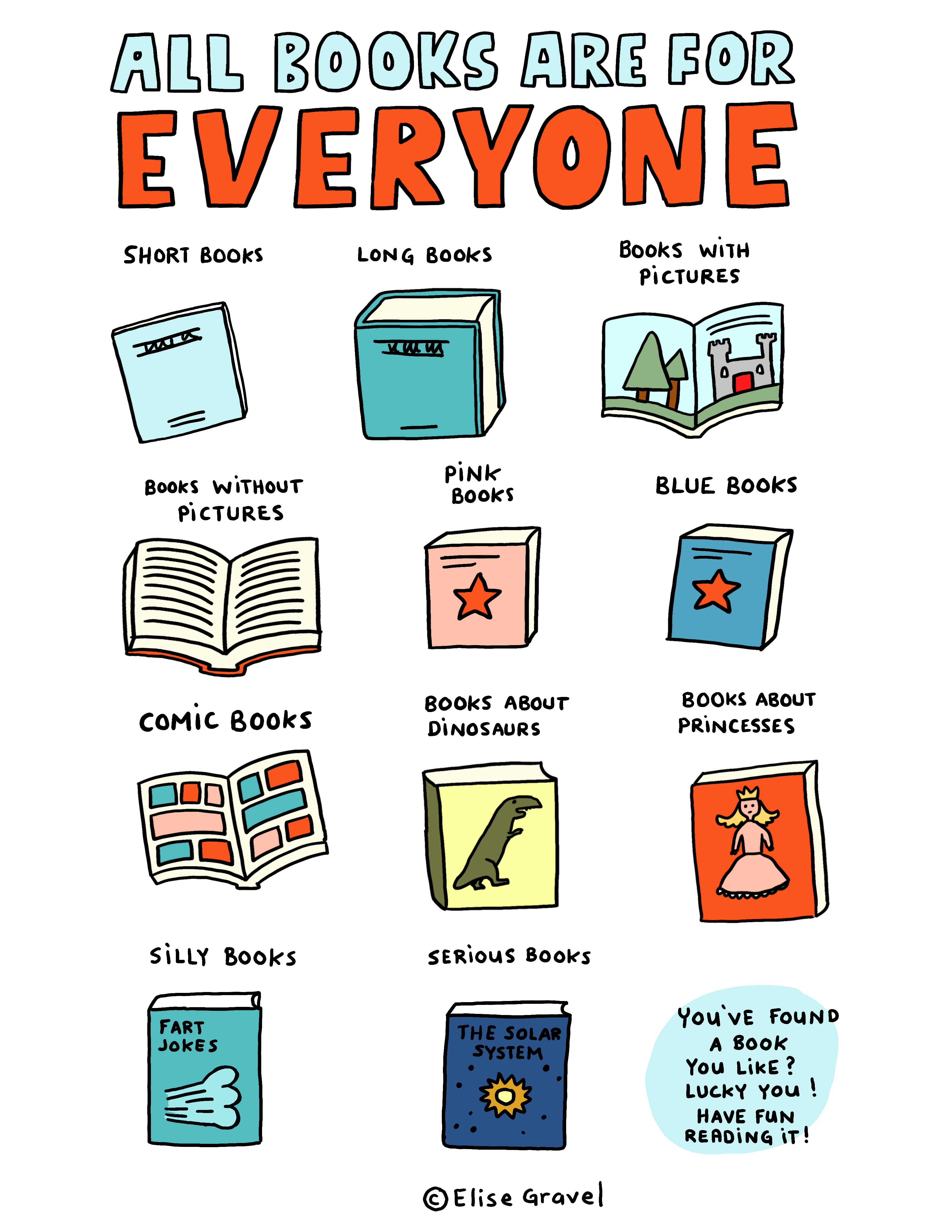 I have two new prints for sale at Sur ton mur!
because yes, I also need to sell some of my art sometimes if I want to keep making free stuff 🙂
Buy them here. 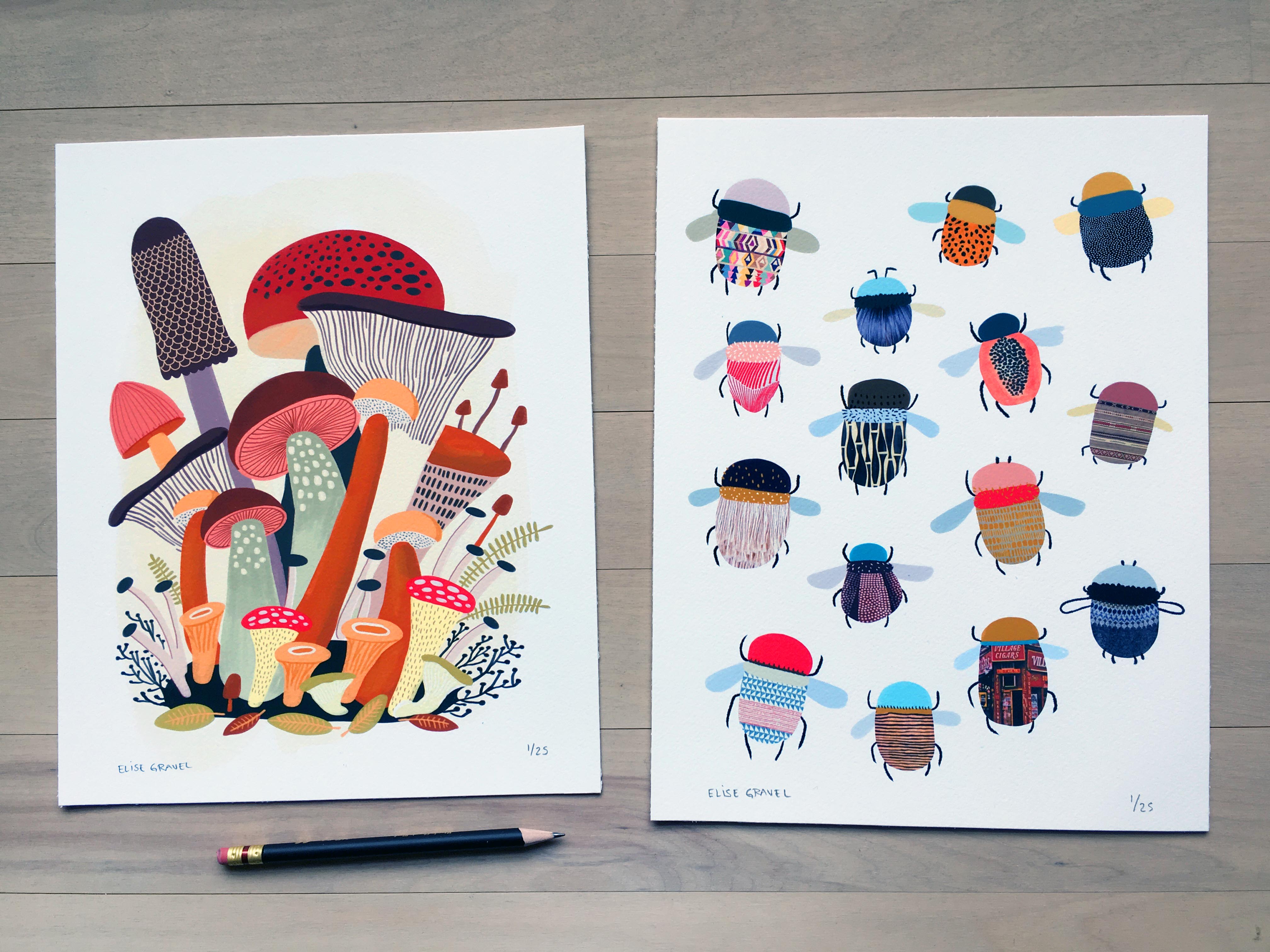 How to feel better

I’ve always been an anxious person and I tend to be a bit mean when I talk to myself. With this poster, I wanted to share one of the ways I developed to be kinder to myself and become my own best friend.

Parents, teachers, educators and librarians, you can download and print this illustration here. No commercial use allowed. If you want to license it, contact my agent (contact form at the top of this page). 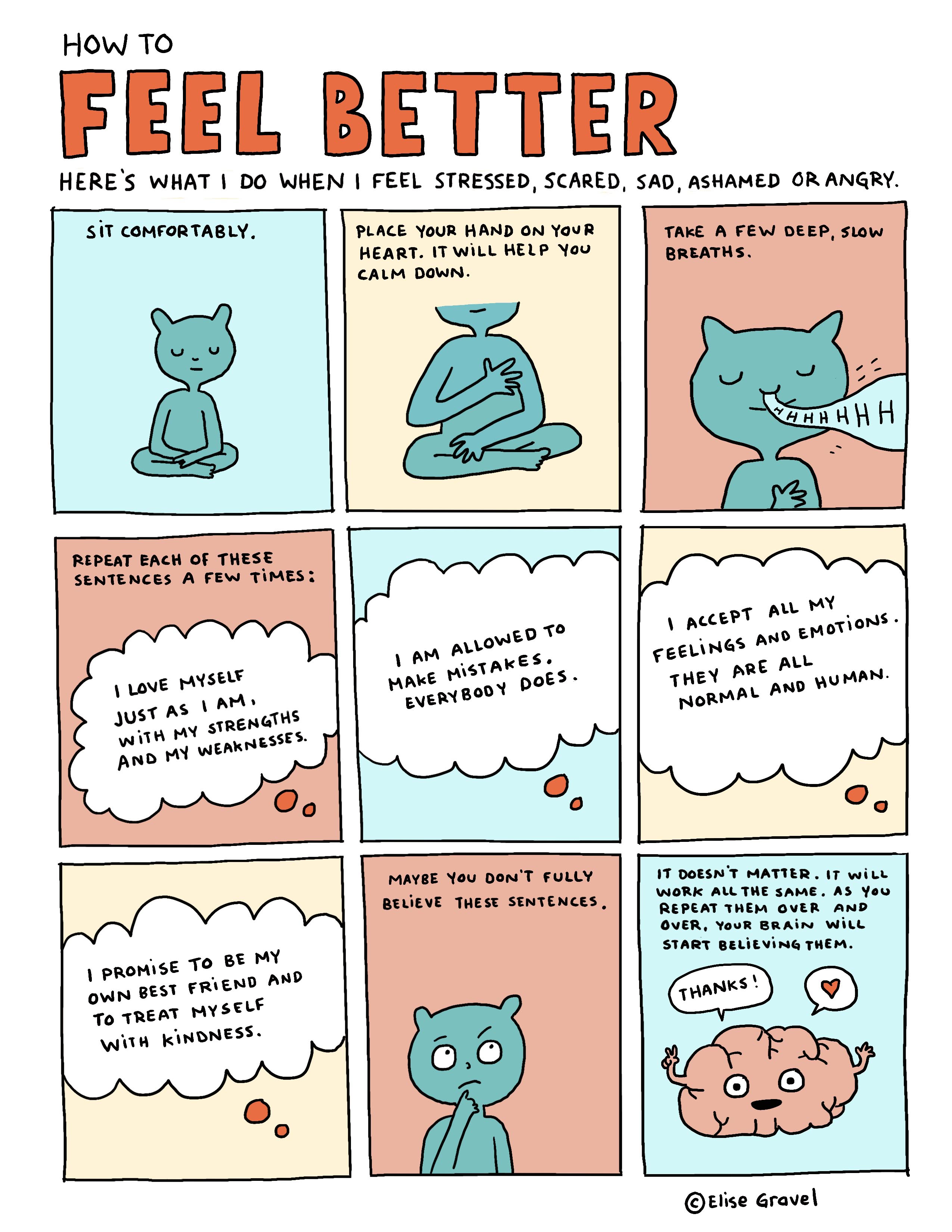 Here’s a free printable poster I made to show kids that all kinds of families are OK, and that families are as diverse as people.
Teachers and parents, you can download it here and print it for school or home use (no commercial uses allowed). 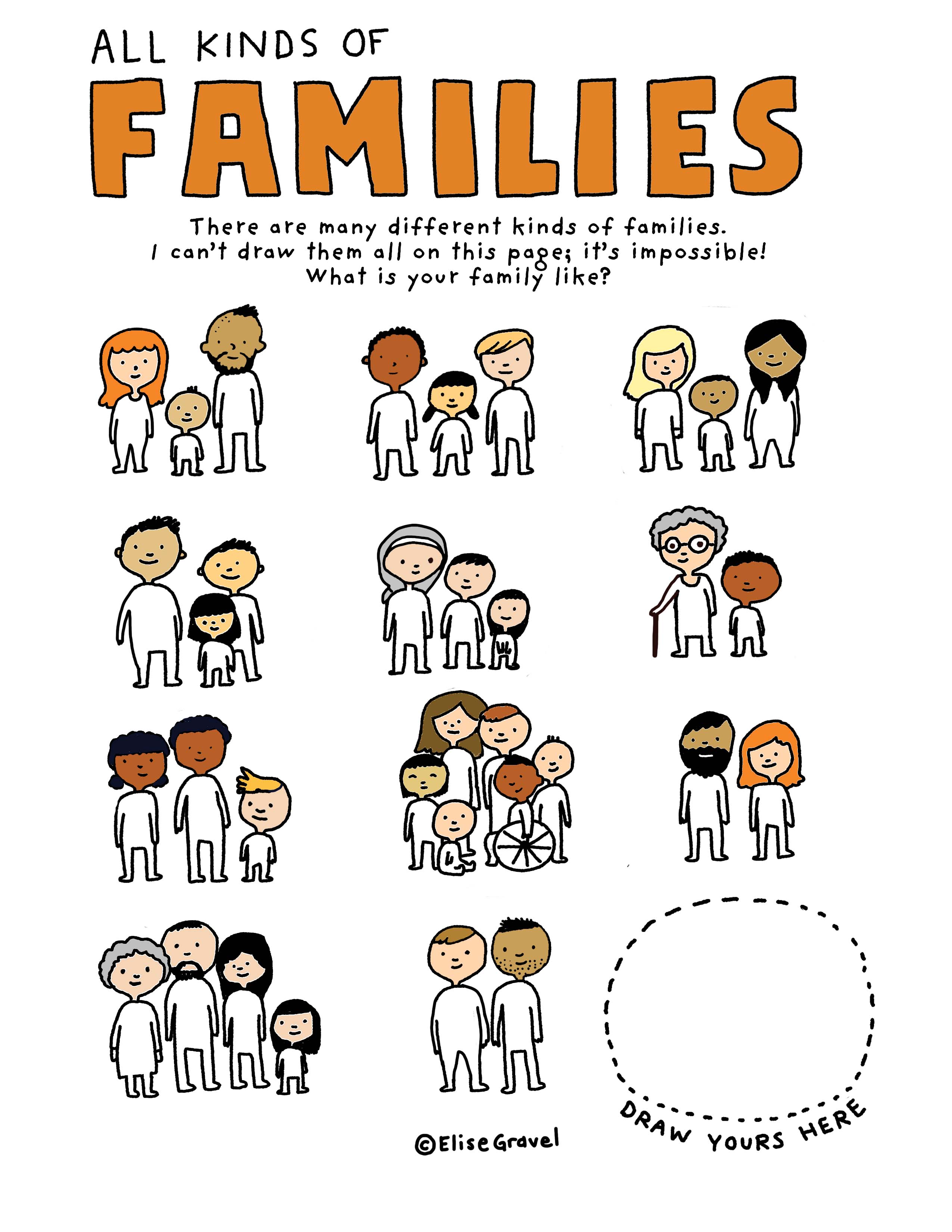 For more free printable posters, visit my boutique in the “free printable stuff” section. To see my books, click here. If you want to license this image, contact my agent (Contact form above).

My mini-posters as coloring pages

Teachers, librarians and parents: you can now print all my educational posters as coloring pages, for free as usual. No commercial use allowed. Download them here.
The posters talks about diversity, refugees, women in science, gender, climate change, tolerance, the scientific method, autism, consent, equality.
You can learn about my new posters by following me on Facebook, Twitter or Instagram. 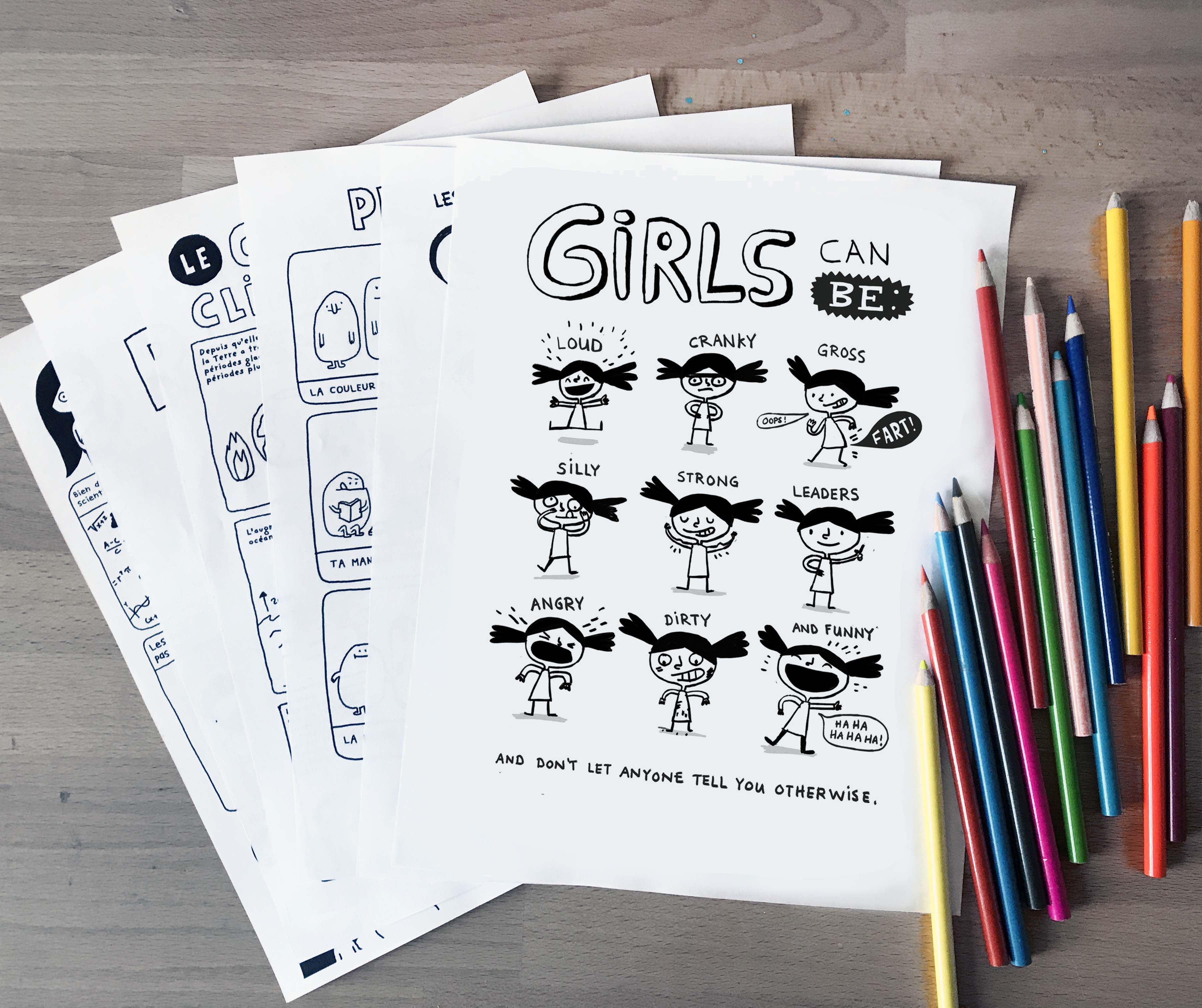 Here’s a free printable poster I made to explain autism to children. Teachers and parents, you can download it here and print it for school or home use (no commercial uses allowed).

I am not an expert in the matter; I had a lot of help from autistic people to fine-tune the French version of this poster, but I’m always interested in learning from your own experience with autism if it differs from this explanation or if you have something to add. You can comment on this poster on my Facebook page.

For more free printable posters, visit my boutique in the “free printable stuff” section. To see my books, click here. If you want to license this image, contact my agent (Contact form above). 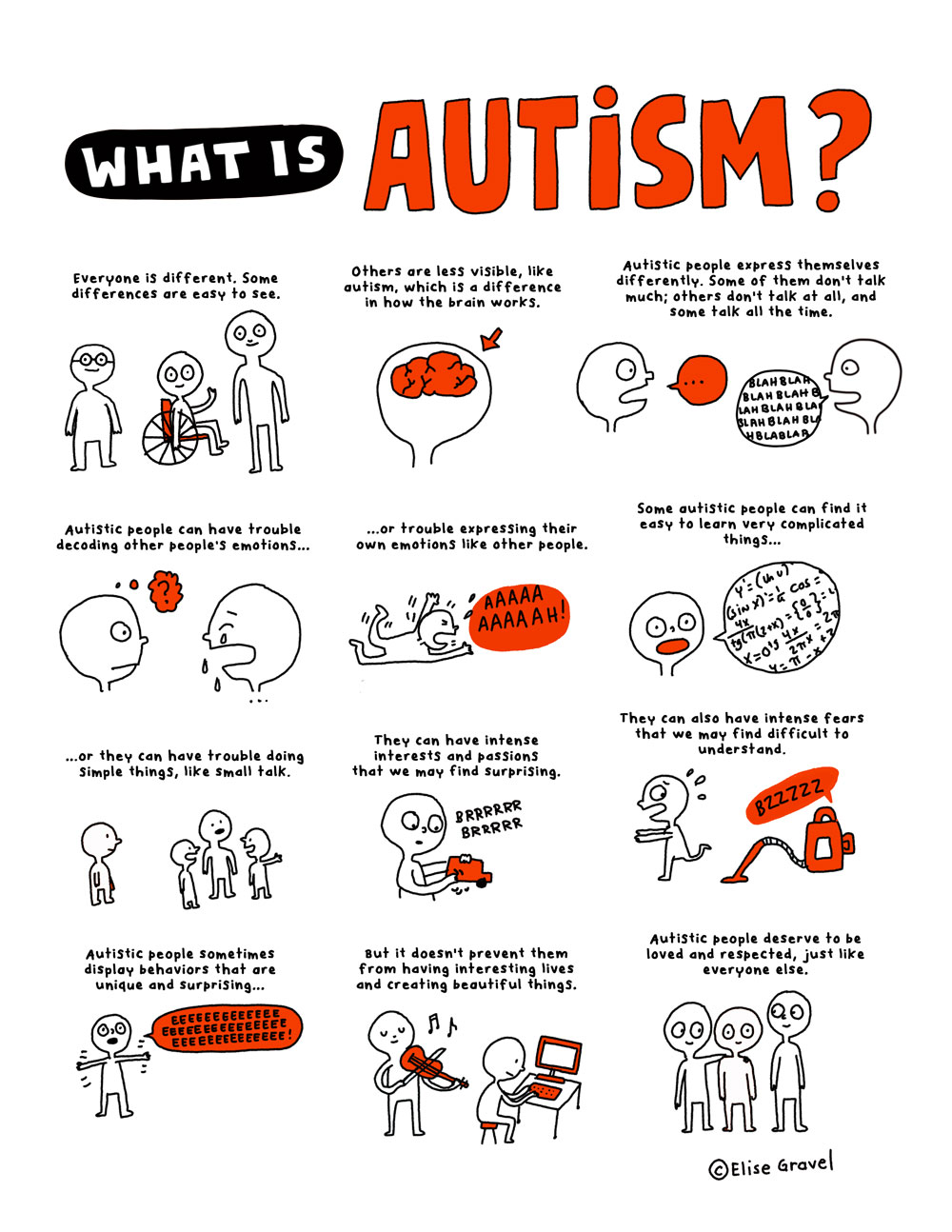 Here’s a mini-poster I made to teach kids that their gender should not define what they like.
There is no such thing as “boy stuff” or “girl stuff”. Pink and blue are for everyone! 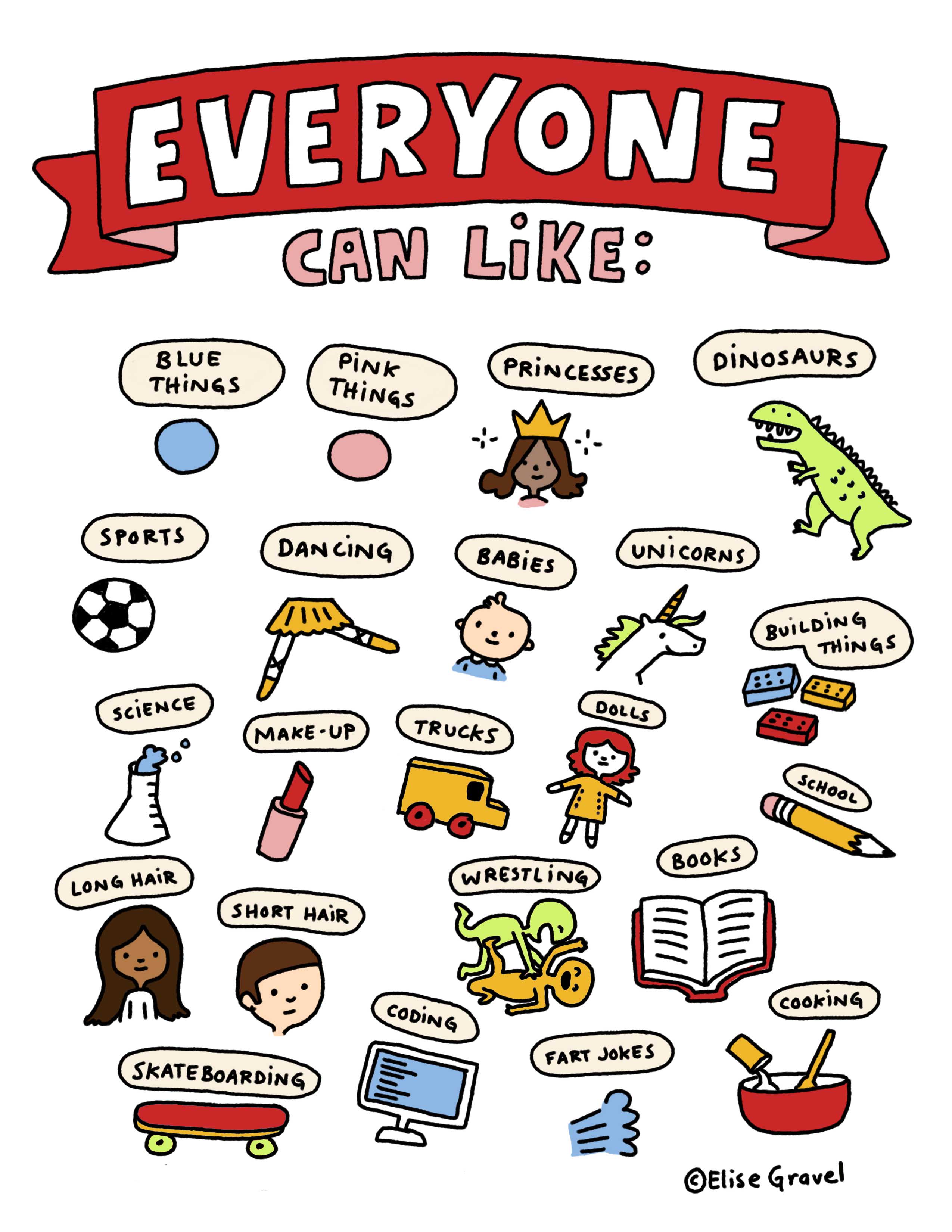 Parents and educators, you can download a higher resolution of this mini-poster for free here (personal and classroom use only; no commercial use allowed).

For more free printable posters, visit my boutique in the “free printable stuff” section.
If you want to license this image, contact my agent (Contact form above).

It’s the story of my life: no matter what I’m doing, I feel like I should be doing something else. Sounds familiar? I think we’re not alone. 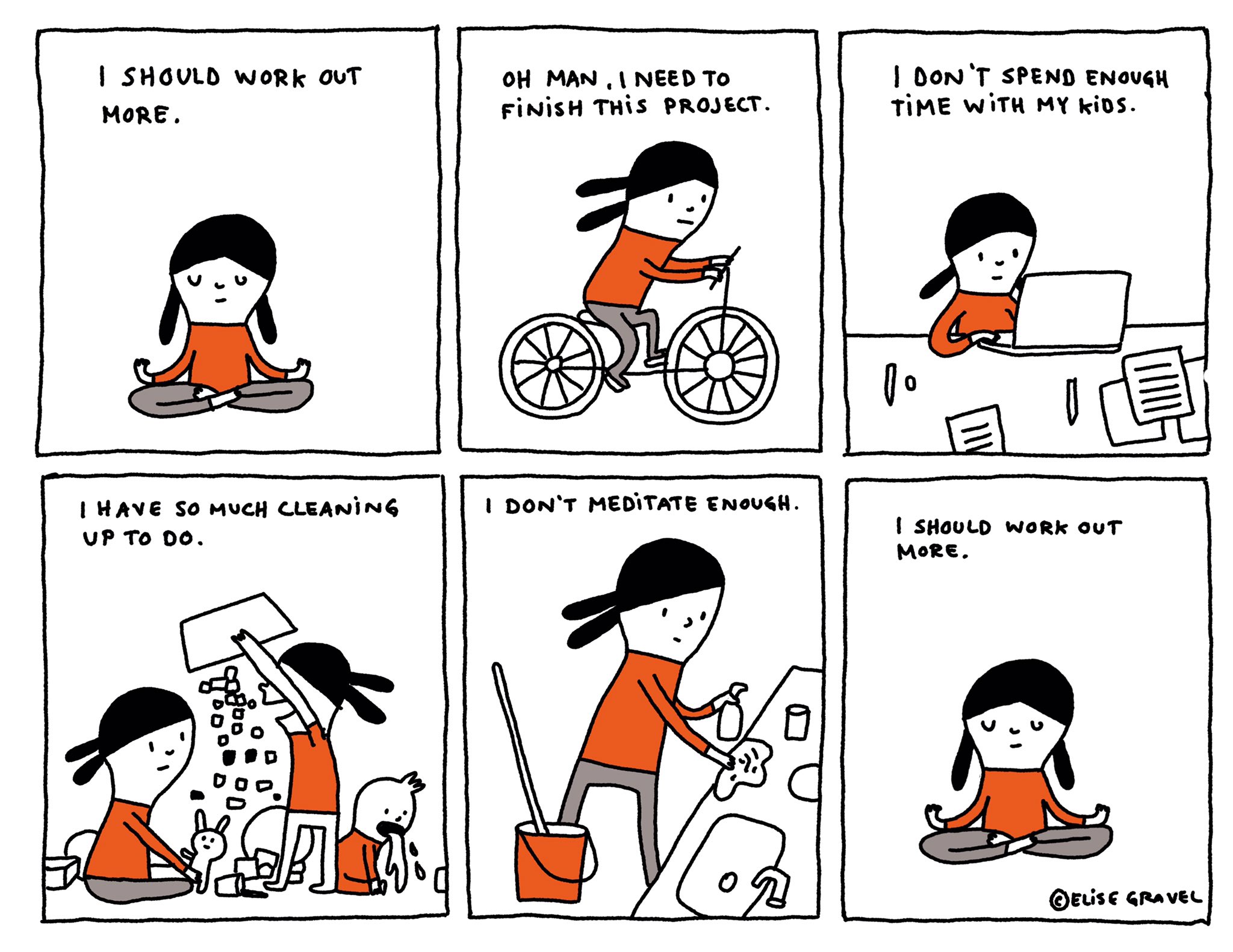 Refugees who changed the world 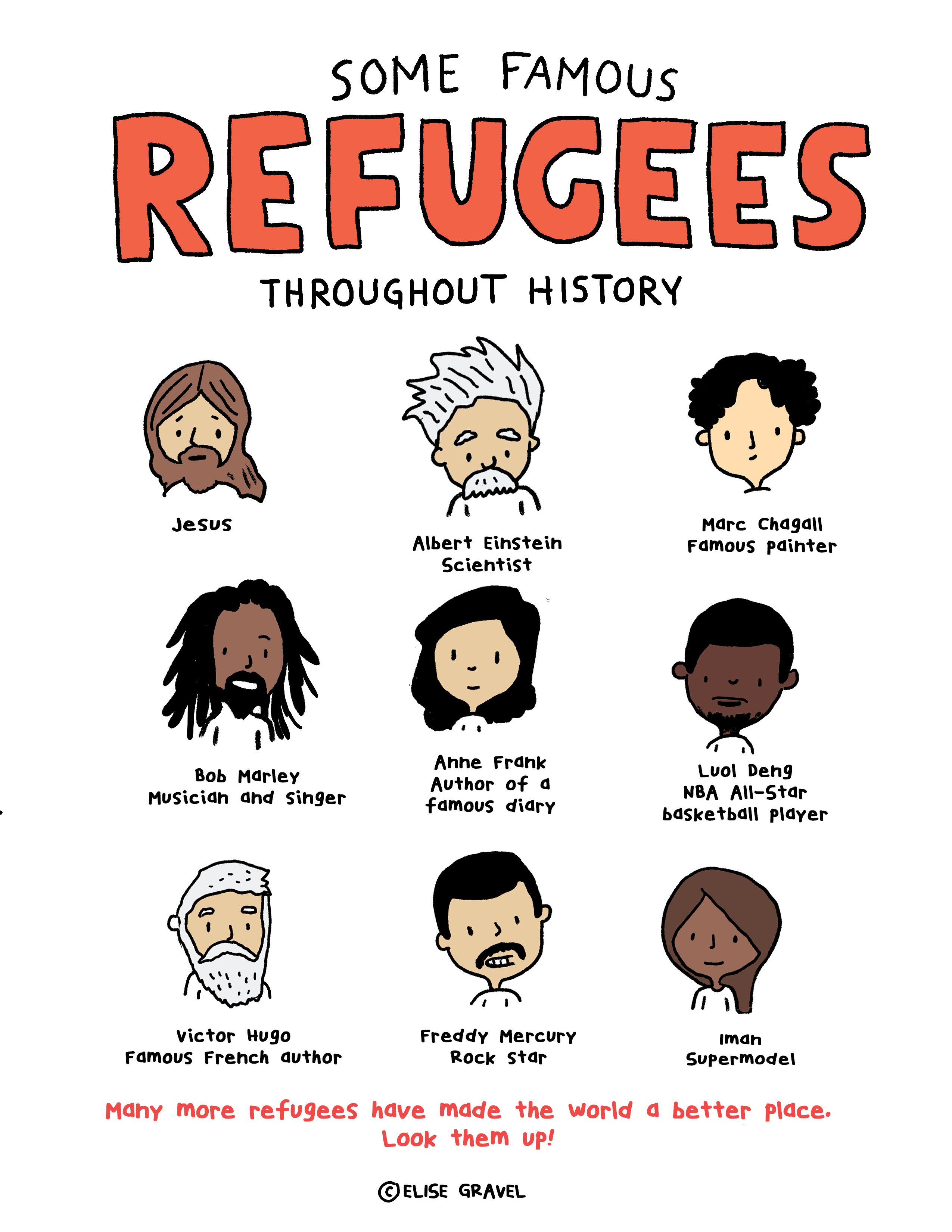 I made this poster because I think we don’t hear enough about the positive contributions refugees make to their host countries. Many of them have even changed the world!

Parents and educators, you can download a higher resolution of this mini-poster for free here (personal and classroom use only; no commercial use allowed).

For more information about famous refugees, visit this website.

The Globe and Mail liked my book!
Here’s what Anna Fitzpatrick had to say about it:

“If you see any image of the woods in any children’s book, you’ll probably see mushrooms,” author and illustrator Elise Gravel tells me over the phone from her home in Montreal. “We just love drawing them.” She’s specifically talking about the fly agaric, a toxic red-cap mushroom with white spots, perhaps most famous for providing Mario with growth spurts in the classic video game and which has been a staple in picture-book illustration since then for its cartoonish appearance. 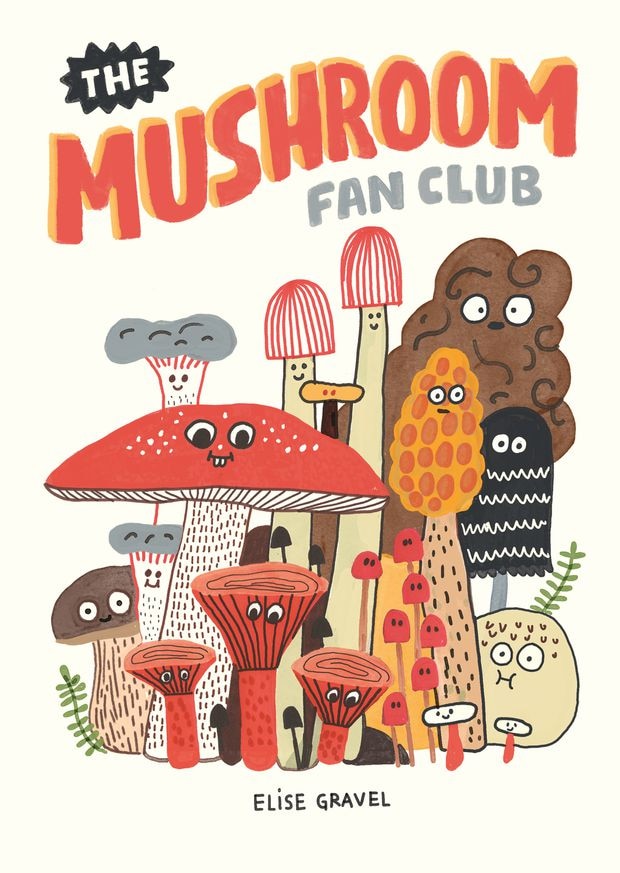 The fly agaric is just one of many mushrooms that Gravel brings to life in The Mushroom Fan Club (Drawn and Quarterly, $20, 56 pages). She also features chanterelles and morels alongside more alien-like species with names such as the Dog Stinkhorn or the Destroying Angel. Although the fungi are anthropomorphized with cartoon eyes and goofy grins, the research behind the book is real. Gravel has created a scientific intro book for budding mycologists, combining picture-book artwork with facts about boletes (some turn blue when touched) and the Lactarius indigo (which produce a milk-like substance when cut open).

Gravel’s cuddly little mushrooms first made their appearance in If Found … Please Return to Elise Gravel, a sketchbook of the prolific author and illustrator’s many obsessions published last year with Drawn & Quarterly, although she’s had an interest in them for years. Around seven years ago, she and a friend took an introductory class given at a botanical garden in Montreal centred on identifying local species of mushroom. “We were hooked after that,” she said. “We wanted to know what everything was.” She continues to regularly forage for mushrooms with her daughters and friends.

The Mushroom Fan Club – which aside from identifying different types of fungi also includes a diagram of the parts of the mushroom, a tutorial on making “spore prints” and advice on how to start hunting for mushrooms at home – is a book that plays to Gravel’s strengths. Although she has a solid bibliography of traditional picture books to her name, it’s these non-fiction books that combine biology with a comic aesthetic where her work really comes to life. This latest book sits comfortably in the tradition of the Disgusting Critters series she published with Tundra. Every book in that series takes a look at an oft-maligned creature – the slug, the spider, the head louse – and casts them as the star in their own story, interspersing facts with what they eat and where they live with sight gags and punchlines. “I always liked bugs and little critters, and felt bad for creatures that everybody found disgusting,” Gravel said. “I thought they were cute, and was always observing them and trying to imagine their personalities.” She read whatever books about them she could get her hands on, although it wasn’t until her own daughters were born that she decided to bring her artistic sensibilities to the subject so she could share her curiosity and enthusiasm with a new readership. “They should be respected like any other creatures. They’re important to the ecosystem. I realized, kids don’t grow up with this disgust. We teach them that. I wanted to teach them open-mindedness toward all creatures.”

The Disgusting Critters series turned out to be wildly popular with young readers and educators alike. Gravel is frequently contacted by teachers with requests to write more of them. The Mushroom Fan Club shows early signs of a similar response. Parents send Gravel pictures of their kids drawing mushrooms, or off on their own mushroom-hunting adventures. The ardour with which Gravel approaches her subject matter is on the surface of every page (“fan club” is right there in the title, after all), and as if the spores of a puffball mushroom, it spreads easily. The Mushroom Fan Club, like The Disgusting Crittersbefore it, gives its young readership permission to indulge in their innate curiosities and to approach the natural world around them with a fascination reserved for storybook creations.

“I first thought, maybe we’re tricking kids into learning stuff,” Gravel said, “but the thing is, they’re not tricked. They write me letters saying, ‘You learn stuff, but at the same time you laugh.’ They know they’re learning and they love it.”