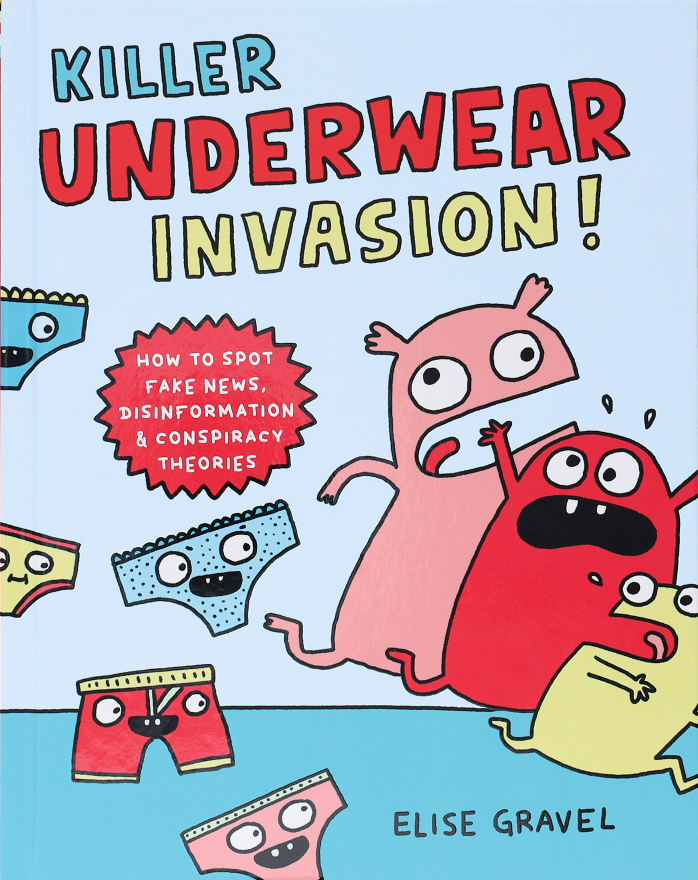 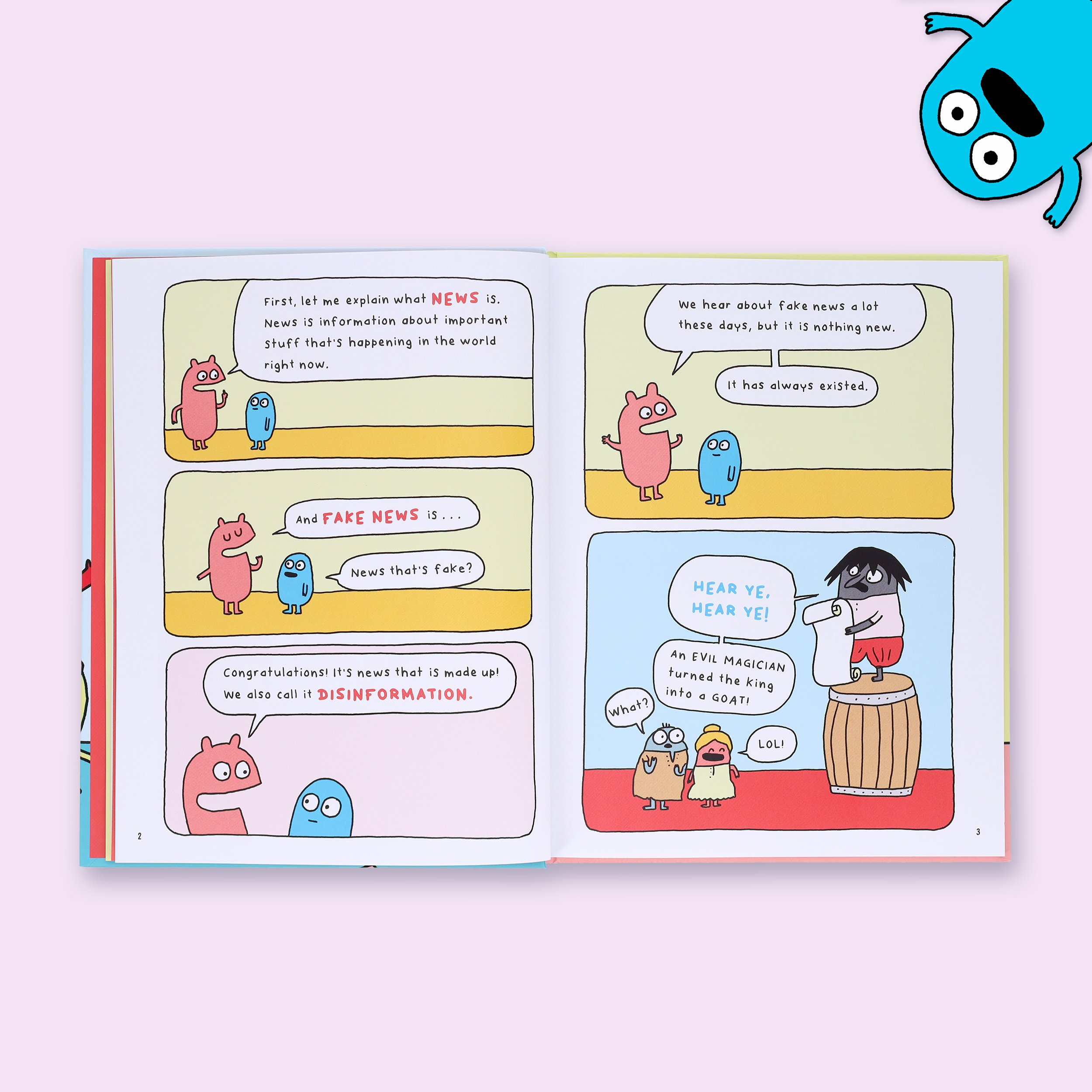 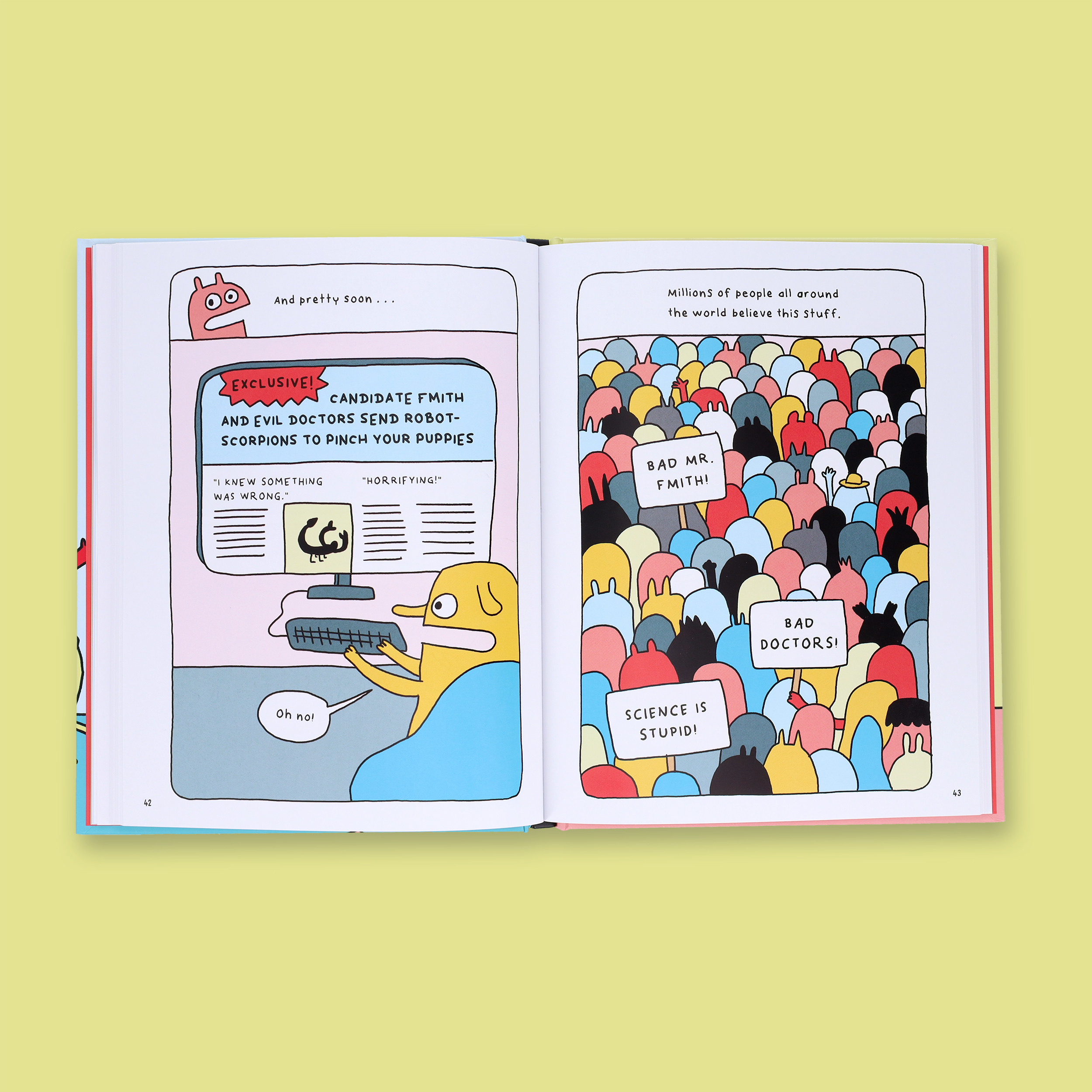 Two jellybean–shaped creatures, one blue, one pink, delve into the intricacies and duplicity behind one of the most insidious and pervasive issues of our time, and the first chapter of this middle-grade comic dives right in: “What Is Fake News?” Gravel does a fine job breaking down complex ideas, beginning with the definition of news (“information about important stuff that’s happening in the world right now”) and explaining that while disinformation is not new (“Hear ye, hear ye! An evil magician turned the king into a goat!”), the internet and other modern technologies have made it much easier to make lies look real and to intentionally spread them. The hows and whys are explored using specific, goofy fictional case studies; and people’s motives (e.g., “Reason 1: To make money…Reason 2: To make money and get famous,” etc.) are plainly laid out. Though the examples aren’t necessarily serious, the consequences are: “So far, I have given you a bunch of silly examples of fake news,” says the pink protagonist, “but fake news is not funny at all. It can actually be very dangerous.” The tone is non-blame-y of consumers (but not purveyors) of fake news, with acknowledgment of the ease of being duped (“Admit it—you’d be curious, too”) and useful advice about thinking critically, examining sources, etc. Well-delineated panel illustrations featuring blobby critters and pastel colors make these thorny concepts relatively easy to get and should leave many readers feeling empowered.- ELISSA GERSHOWITZ, Horn Book

This middle grade graphic nonfiction is an ingenious introduction to media literacy for kids. Using humor and super fun illustrations, author and illustrator Elise Gravel shows how kids can spot fake news and conspiracy theories. This is a must in today’s news cycle, where so much absolute nonsense is passed off as news. I used to teach introductory research and writing to college Freshmen, and if this book had existed then, I probably would’ve had them read it! At the same time, my 4-year-old enjoyed reading excerpts for the illustrations and silly jokes. It’s a really fantastic, accessible introduction that would work great in middle school classrooms. – Margaret Kingsbury, Book Riot